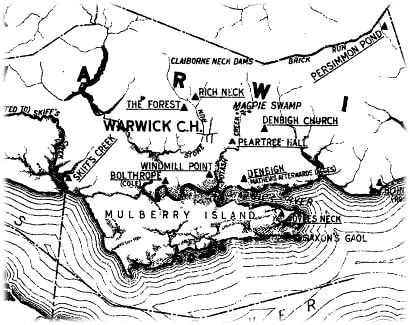 ​
It is not only men who were heros in the early days of the Jamestown settlement. Even if we define heros as those who save others. One of the saviors of the early colony was a young woman named Joan Pierce.
Joan was born in England around 1575. She married a man named Thomas Reynolds and had a daughter named Cecily, born about 1600. The marriage was cut short by the death of Thomas in a sea disaster about the time the child was born.
As was common at the time, Joan quickly remarried. William Pierce was a promising young man who had great talents and goals. Within a few years of the marriage, he had joined the Virginia Company. In 1609, the family left for the colony. However, William, being Lt Governor, was on the lead ship, The Sea Venture, with other men of importance. Joan and their four-year old, Jane, were relegated to one of the other ships, the Blessing, which was part of a convoy of nine ships, crossing together from England to Jamestown. About two thirds of the way over, the convoy hit a hurricane. Three ships were lost, including the Sea Venture.
The surviving six limped into Jamestown, in August, with the stories. Shelters were quickly set up for the hundred new people. However, the farming and harvesting had not been very fruitful due to a drought. The loss of the supplies on the three gone ships was a detriment to the ill-prepared town. The citizens were not well stocked for the coming winter. It being so late in the growing season, no one could try to plant anything. The Indians had sold the colonists some corn, but whether it was enough for a whole winter was another worry.
Luckily, Joan’s mother was a herbalist and had taught her well. Joan, her little girl, Temperance Flowerdew, Meg Worley and another woman, lived together that first winter. She taught them to collect and grind acorns to supplement the cornmeal mush. She collected herbs from the lands around the fort which could be made into herb teas and medicines. They survived what came to be known as the Starving Time. It is said that Joan hated Jamestown saying that “there is nothing here but sickness and laziness.” The brisk, dark-haired young woman lost much of her weight and energy.
Thinking herself a widow, again, Joan turned her attention to gardening as soon as she had the strength, the next spring. Captain John Smith noted in his writings that Mrs. Pierce had a garden of 3 to 4 acres, which she maintained herself.
An amazing event on May 20, 1610 was the arrival of two ships, the Deliverance and the Patience, from Bermuda. The three ships lost at sea had arrived, partly wrecked, on the island of Bermuda. It took the men more than half a year to rebuild them into two ships and find their way to Jamestown. During that time, one of the passengers, a young man named John Rolfe, found a good quality tobacco plant which he nursed and brought to Virginia with him. Mr. Pierce, Joan’s husband, had befriended the younger man and they stayed close until the death of Rolfe in 1622.
The next year, the Pierces assumed that the colony was safe enough for Cecily, Joan’s daughter from her first marriage. They had her come over. Cecily became a celebrity in her own right and is considered in some circles to be the first “Southern belle”.
The Pierce family grew with several more children and took John Rolfe in as part of their extended family. John married Pocohantas around 1614 and he took her to England to meet his family. They never saw her again, since she died in England in 1617 after having given birth to a son, Thomas. John returned to Virginia without Thomas, who was raised by his family.
Jane, William and Joan’s oldest daughter, was probably about 13 when Rolfe returned. They married within a year or two of his arrival and had one child, Elizabeth, before Rolfe was killed by his own in-laws during the Good Friday massacre of 1622.
Jane and William were lucky enough to live long lives, purchasing much acreage, making them wealthy. By 1624, they had developed a plantation on Mulberry Island, about a mile from Jamestown, a place big enough for 13 servants. William participated in the short lived coup against Governor Harvey in 1635. Eventually, Joan was referred to as the master gardener of Jamestown.