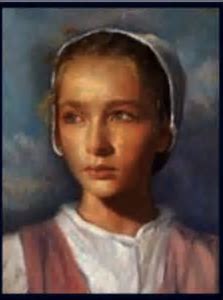 The ship, Mary and Margaret, landed in Jamestown September 30, 1608. It was part of the second supply, bringing supplies and more settlers to the new settlement of Jamestown. On board were Thomas Graves, gentleman, his friend Rawley Crowshaw and Mr. and Mrs. Thomas Forrest. With the Forrests came Mrs. Forrest’s lady’s maid, Anne Burras (Burrows). A John Burras was abroard, also. He may have been an older brother to keep an eye on his young sister in her first job. The couple had not been married very long, only about three years. There is no indication of children. Mistress Forrest apparently got sick on the journey. Anne was responsible for caring for her employer.

The fort at Jamestown was small at best, covering about 1 acre of land. The houses and the church were shoddily built. The first shipload of men did not believe they would be staying very long, so they threw up poor shelters. There was no where nice for Mistress Forrest to be as she fought her illness. She died within a month or so of arriving. Fourteen-year old Anne was unemployed. The only female among over one hundred men, most unmarried, Anne had the attention of all the inhabitants.

Only two or so months after landing, Anne found a man she could be comfortable with and married John Layton. John was a laborer who was twice her age. They had the first child to survive in the New World in December 1609. And they named her Virginia. At that point, they moved to a small outpost closer to the ocean called Point Comfort. It was fortuitous. For that was the winter of the Starving Time. Those stuck within the fort were unable to get out for months due to Indian attacks. Their food supplies did not hold out. Point Comfort had no Indian attacks and the salt water nearby had plenty of seafood.

They and their growing family survived. During the next few years Alice, Katherine and Margaret joined their older sister.

The family next survived the Good Friday massacre in March 1622. They then moved a little further away from the James River, residing in Elizabeth City (now Newport News) by the muster of 1624.  At this point, John had begun to accumulate patents of land. In the muster, it was indicated that he had 100 acres on the east side of Blunt Point Creek, in lieu of 100 acres on the island of Henrico. This city became less favorable after the massacre.

In 1636, John and Anne’s brother, Anthony Burrows, patented 1250 acres near Elizabeth City. They had become moderately prosperous by the 1630s. But even prosperous people could not fight the poor quality of life at that time. It is assumed that Anne died sometime in the mid 1630s.