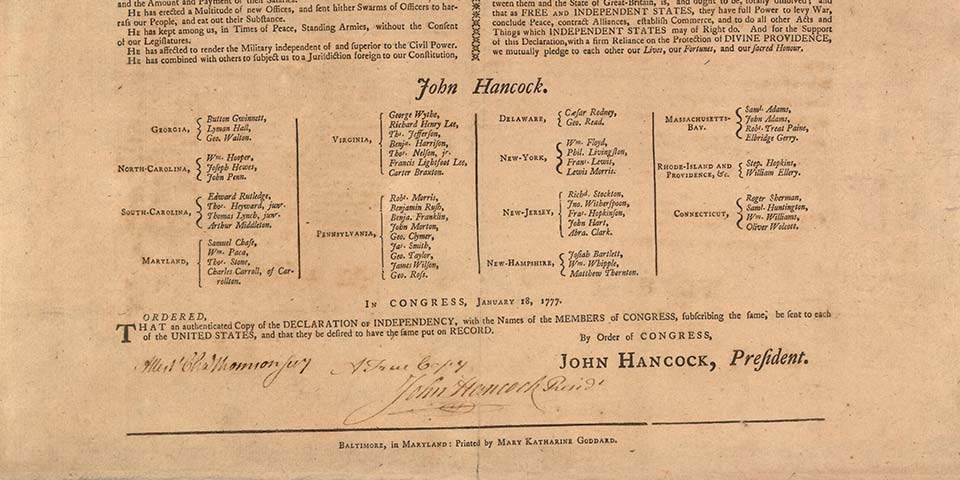 One of our early Founding Mothers has a long list of “firsts” to her credit. Mary Katherine Goddard was born June 13 1738 in either Groton or New London, Connecticut. Her parents, Dr. Giles Goddard and Sarah Updike Goddard, had one younger son, William. They educated both children, which was unusual for the time. Since Dr. Goddard was both a medical doctor and the postmaster of New London, it was mostly left to Sarah to tend to the teaching. William was apprenticed to a publisher while Mary Katherine stayed at home. But that did not last long.

Dr. Goddard died and William began the first newspaper in Providence, RI, the Providence Gazette. His mother and sister moved to Providence for support. William put both women to work on that publication and on West’s Almanack, an annual publication. Then William walked away from the business and moved to Philadelphia. The ladies ran the newspaper on their own for three years before William decided to sell it in 1768 and move his family to Philadelphia to join him.

Mary Katherine helped William publish the Pennsylvania Chronicle from 1768 to August of 1773. By that time, William got wanderlust again and moved to Baltimore. For about five months, Mary Katherine ran the publication alone. Then she sold her interest and moved to be with her brother again. He had come up with another business venture: a postal delivery service.

Although she began as an assistant, by May of 1775, Mary Katherine was acknowledged as the editor and publisher on the masthead of the Maryland Journal, probably the first woman publisher before the Revolution. William’s postal service was a hit. But Benjamin Franklin became the postmaster general, not William. That same year, Franklin named her the first female postmaster in the colonies, and probably the first female employee of the new government, a job she held for fourteen years. However, with the war, the Continental Congress had so little money that Mary Katherine had to find her own funds to pay the postal riders. Money was so hard to come by that she bartered with subscribers and accepted payment in beeswax, meat, flour and butter.

The Declaration of Independence was signed in 1776. At Christmas, with the British chasing the American soldiers out of Pennsylvania, many colonists were becoming afraid of the Revolution. Then, to everyone’s delight, the war turned, and Washington won at Trenton. The Continental Congress decided to reprint the document, with the names of all the men who had signed, to boost morale. The first printing had only two signatures. Mary Katherine offered to reprint it. At the bottom of the document, she proudly printed her name as publisher. This printing is called the Goddard Broadside. As the war progressed, she published news from the warfront, Thomas Paine’s Common Sense and extra editions as she saw fit. The Maryland Journal was one of the few continuously published papers throughout the Revolution.

During the war, the Journal contained the standard news, but also supported the American view of the war, supporting the growth of linen and the making of cloth, for the women to do their part in the fight.

In 1779, William and a partner set up a paper mill to solve the problem of the paper shortages that were throughout the colonies. Many publications had to stop or reduce issues due to the shortage. Mary Katherine did not close down. However, in 1784, right after the end of the war, William forced her out. They had made the Maryland Journal into one of the most highly read journals in the country. Yet, he ended her tenure. Luckily, she still had her postmaster job. But she never talked to him again.

By 1789, with postal services in demand, all postal employees were expected to travel far distances to deliver the mail. As a female, it was considered unseemly for a woman to travel that far alone. Despite over 200 signatures on a petition supporting her, Mary Katherine lost her job.

When she lost her job as publisher, Mary Katherine began a store in Market Square, Baltimore selling books and dry goods. She ran it from 1784 to 1810.

Mary Katherine Goddard died August 12, 1816, after witnessing the invasion of Washington, DC by the British four years earlier. She left her estate to the woman who tended her in her last years, Belinda Starling, a slave who was freed in the will.