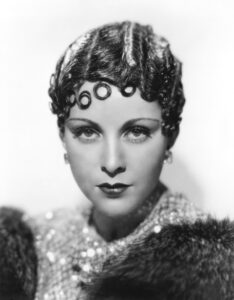 The 1920s was a decade of rebellion, free-for-alls and action. Everyone got wrapped up in the new culture emerging. Between the Great War and the Great Depression, there were a few years of craziness and decadence for the population of North America and Europe. The dying gasps of the agricultural economy were heard as people migrated to the new business and industrial economy.

During and immediately after the war, women were required to move into factories to take the places of the men who went to war and, then, the ones who didn’t return. Women began to see themselves differently. They saw themselves as people with rights, options and freedom. And they reacted to the perceived changes in a typical way…they over reacted! Opulence was in. Hems and hairlines were short.

Women who worked in the factories had already started cutting their hair for safety reasons. Others followed suit. Especially movie stars. And, as the movies were getting more and more popular, the cinema goers were following the styles of the actors and actresses. Everyone started to cut their hair. Even the hesitaters cut theirs by the end of the decade.

“Bobbing” hair merely meant cutting the hair short. There was the Dutch boy cut and the blunt bob, both best for straight or straight-able hair. The slightly shorter version was the shingle cut, where a razor was used to cut the hair at the nape of the neck into a V. The Eaton cut, sported by singer Josephine Baker, was a hug-the-head shortest of all cut. The variations included kiss curls (or spit curls) and curl wings on the cheeks. The kiss curls were supposed to indicate how many different men a girl had kissed.

For those who had the time or the right kind of hair, there was the longer bob with finger waves and the even longer (not quite shoulder length) version called Marcel waves. These required hair gel, hot curling irons and hair clips to maintain. The finger waves were combed in by zigzagging the comb slowly through the gelled hair

The woman who could not part with her long tresses could have a fake bob, with most of the hair up in a chignon, held in place with bobby pins. (Did you ever wonder where the term came from, before?) Only the front looked like she had bobbed her hair. There were a few who would buy wigs to wear when going out so that they could look modern.

Accessories for the head were over the top in that decade. Thin fabric bands, worn low on the forehead with an off-center flower or jewel were quite common. Wider cloth bands, which practically covered the forehead, and all but the crown, were popular, too. Hats were close-fitting affairs made out of any soft fabric: wool felt, knits, cotton, linen, heavy rayon or, even, straw. Hats were worn plain as well as decorated. The hair had to be short and straight to handle the hats!

Cosmetics became popular. Heavy lid color, thick mascara and pencil-thin eyebrows were an imitation of the screen stars. Hair coloring was also used to copy starlets. The platinum blonde was born. Some henna products tripled in sales during the decade as drug store shelves could barely keep the favorite hair tint in stock.

The decade remade women into the modern women.