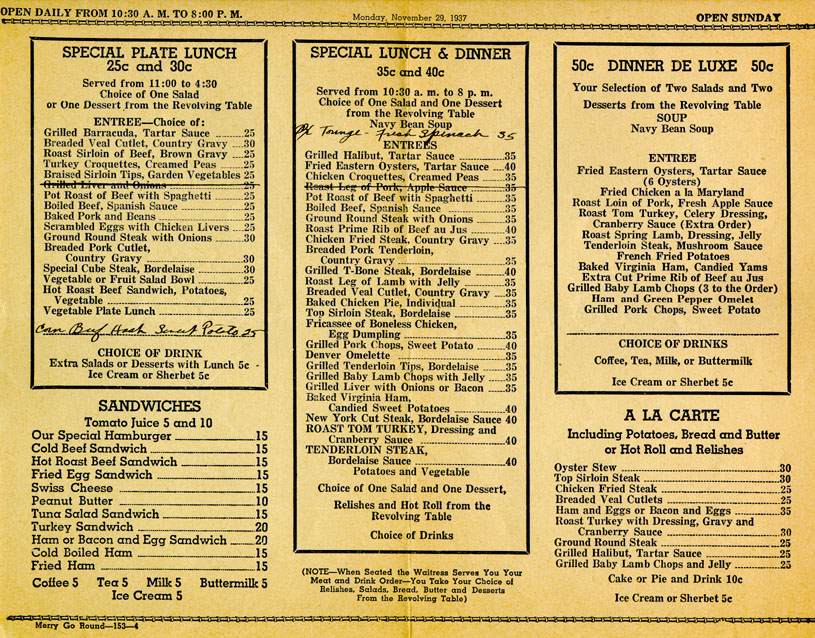 1930 A survey by the U.S. federal government determines that 38 cents is the average amount paid for lunch in big city commercial eating places across America.

Here are some examples of prices:

1931 Schrafft’s was a chain of moderately priced restaurants along the East Coast. This menu was for the one on Flatbush Ave., NYC: Special Green Vegetable Dinner, 75¢; Minute Steak, $1.25; Chicken Salad, Home Style, 90¢.

1934 On its August 15 menu Mary Elizabeth’s, a tea room on Fifth Avenue at 36th Street in New York City, offers a Tropical Chicken special with Orange Sections, Pineapple Hollandaise, and New Green Peas for $1.10. A Cream Cheese and Jelly Sandwich is 30 cents, while Iced Watermelon is 20 cents.

1937 Toffenetti’s Triangle Restaurant in the Chicago Loop: “…lean, savory, juicy Hamburger sandwich, With a white crisp slice of Bermuda onion, With a beautiful slice of tomato, With a dessert, With a beverage … All for only 30¢.”

As you may notice, most of the foods served in these moderately priced restaurants are fairly standard American fare.  French and Mexican cuisine was sparse. But I sure would not go out to a tea room in Manhattan to purchase a cream cheese and jelly sandwich!

Even the high prices at the biggest dance studio/restaurant in Boston, the Cocoanut Grove, was a pittance at fifty cents a drink for a standard Manhattan or martini. Of course, the glasses were a little smaller back then. A steak dinner could be had, there, for just over a dollar. And that included sides.

Writing historical fiction based in the 1930s, makes me curious about how my heroines dressed. Kate and Betty Hadley, my starring ladies, live in Louisburg Square, Beacon Hill, Boston. That means they have money. Well, their father does, anyhow, and they live at home with him. (They are still young.)

With that said, they are not at all poor and they do not have to work for their food and living accommodations. They do not dress like the poor Depression-era women in their wrap-around cotton dresses with the tiny print design, kerchiefs and comfortable oxfords. The styles are extremely different from the Roaring 20s when women were just getting voting equality. To accent equality, they often wore their hair short, straight, masculine. Their clothes were also square cut, with a dropped waist, hiding their feminine shape

My ladies dress more like the Hollywood actresses, or, at least, like the other Boston Brahmins. Let’s look at a few instances.

Betty is blonde and Kate is brunette. Their hair has long since grown out of the square cut boy-look of the 20s. Straight hair is out. Waves and curls are in. And since most of us do not have naturally wave-perfect hair, that means help is needed. Finger curls and pin curls solve many of the problems of trying to get the hair to curl. Short hair is curled into ripples by wetting it and placing open hand on the hair, press down and pull fingers together, hold a minute then gently pull away without disturbing the hair. Another technique, especially for longer hair, is curling the damp hair and pinning the curl against the head, then waiting until it dries. Taking the pins out gives the patient woman a head-full of curls. The finished product often has barrettes or flowers to enhance the femininity of the look.

Different hairdos require different hat styles. Over time, the stylish cloche added a brim and the brim grew. It became a slouch hat, with the brim turned up at the front. This hat is mostly for straight hair styles or short- hair. The most common hat is a small felt one with a single feather. In the summer, two types of hats are popular, the small white, flat one or the large wide-brimmed one, to help with the sun. Late in the decade, the men’s style fedora became popular, and Kate and Betty wear them when trying to look serious.

A very important part of dress is accessories. Bags at the beginning of the decade were small and flat, carrying very little. Later in the decade, they got a little bigger, with handles. They are big enough for Betty to carry her pen and notepaper, which she always does. However, the bags do not work with evening dresses. For that the ladies change to small purses, with jeweled clasps, or gold and silver lame cloth. The other important accessory is gloves. A well-dressed woman always wears gloves when she goes out. During the day, the gloves reach mid arm length. They are made out of fabric like cotton, or lace, or leather, depending on the outfit. Coordination is of the utmost importance. For those who can afford it, coordinating shoes, purse, gloves and belt is considered very chic. Evening gowns require longer, over-the-elbow gloves, usually white or a very pale pastel. However, that depended on the style of dress. Some dresses have matching boleros, in which case the long gloves do not work.