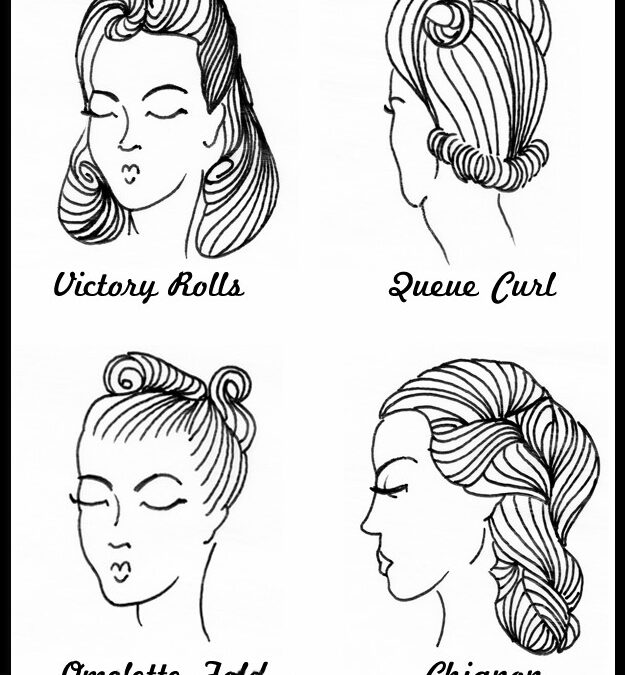 Curls were in in the 1940s. Pin curls, roller curls, brushed into place curls. Women could make them, artificially if need be, and men might be blessed with them.

Men were clean-shaven, their hair short. Parts were common. The pompadour was still around, but not as popular as it would be in the 50s. Curly hair was worn slightly longer on top so it could be swept up and worn wavy at the top of the head.

Women’s curls were big! They were achieved with pins or rollers, and any combination of chemicals that kept them looking good. Longer hair tended to be in vogue because, with so many women working, there was not enough time, or, honestly, money, to keep the short do at prime length. But the hair needed to be kept off the face for factory and office work. Plus, it was patriotic to not spend a lot of money when our boys were away fighting for our lives.

Turbans and head scarves were popular. They both achieved the same end, keeping the hair out of the way. The scarves were often multicolored and tied at the top of the head, where the knot was center of attention. The forehead was decorated with small curls or bumper bangs. More on that last one, later.

The ultimate show of patriotism seemed to be the Victory curls. These were big sausage sized curls kept in place with plenty of spray and pins. They were the ultimate pinup girl’s hairdo. Remember Betty Grable? These curls were worn piled on top of the head or pulled back and made into a roll at the nap of the neck. Sometimes both at the same time.

For those without the time or inclination, there was the hair snood. It was a loosely knit (or crocheted) item which took in all the hair (usually loose tresses) up to the crown of the head. The hair was seen through the loose stitching, but held away from shoulders and face.

For the lady who had the time, there was the omlet fold. Hair was parted in the middle, all hair on one side was rolled into a huge curl towards the part. The back was done in a variety of ways. This took patience.

For very long hair, or fake hair, there was the wrapped braid, a little country looking. It was not a big deal in the cities. Straight long hair could be worn long, with only the bottom curled, practically covering one eye, known as the peekaboo. Veronica Lake sported that hair style in several of her movies. Another look for quite long hair was barrel curls, a version of the Victory curl, but only at the ends of the tresses.

For medium length and shorter lengths, women could wear curls. Rollers worked for longer styles but pincurling wet hair and sleeping on it was quite common for the short styles. In the morning, all the woman had to do was take the pins out and fluff or comb. Page boy styles, not as popular as they would become in the 50s and 60s, were designed for ear length straight hair.

For slightly longer hair that was too short for the Victory curls, wearing the hair up with small curls pinned in place was just as popular. The pompadour, reminiscent of the Gay 90s, came back in a modified style, lower on the crown than before. The trick was to grow very long bangs to get the bulk a lady needed for the look.

So, for man or woman, the 1940s tended to accent the curl, or at least, the curve of the hair. Very pleasing to the eye and a welcome softness to another-wise tough time. 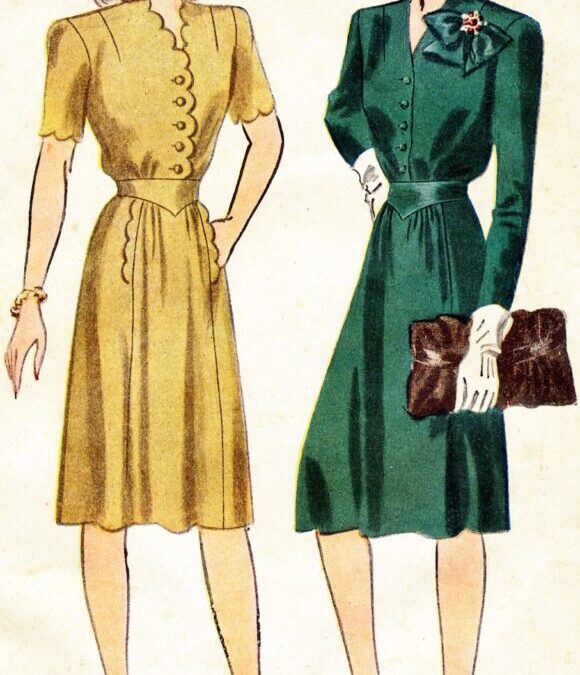 Just like the 1910s, the fashions of this decade can be divided into two types, during the war and after the war. The all-out effort of the war dictated that the civilians had to be deprived of meat, dairy, silk, wool and many other items. This led to simplicity in style and dependence on just a few looks to carry women through the war.

The most obvious stylizations during the first half of the decade was the adaptation to little material. Skirts were almost all A-line, up to the knee. Waists were fit high and as small as possible. There was a slightly masculine look to tops. Every top seemed to have shoulder pads and a square cut. And red lipstick was on every woman.

Everyday dresses tended to be rayon or cotton. Their sleeves ended just above the elbow and could be puffy or straight. The shoulders were padded lightly. The skirts of the dresses were the simple A-line cut. Dresses were often solid, in patriotic colors, or with large prints. Necklines were quite modest, with laces and bows around the collars.

As many women were going to work, suits became popular. Made mostly of wool, they were harder to come by. The soldiers needed the material first. The advantage of suits over dresses, in addition to the professional look, was that two suits could become four looks, when mixed and matched. Suit skirts were neither straight nor gathered nor pleated. Jackets were longer than previously, reaching mid-hip. When buttoned, the jackets could be worn without a blouse, just a scarf for color. Boleros became more popular. These were shorter jackets, without buttons. A blouse or dress was worn with it.

Blouses, worn with suits or with a skirt, only, usually were buttoned down the front. Necklines either were V-shaped with lapels or a Peter Pan collar. A cardigan was sometimes worn with the blouse rather than a jacket.

Shoes were plain and chunky. Leather went to the soldiers. Women wore velvet, mesh, reptile skin and wood. Early in the decade the short thick heel was popular. Later the heel became thinner. This is when the wedge came out. It was pronounced to be safer than pumps. Maybe it was. Maybe it was just a popular option. Many of the shoes had peepholes at the toes, a stylistic choice. It had become too expensive to put designs in the shoes. As summers were seen as relaxing times, slip in shoes made a presentation. Loafers made their entrance among teens and working women at this time.

Coats for warmth were plain, square and to the knees, in the early 40s. They buttoned down the front and had narrow sleeves, which may or may not have had cuffs. Fur trim was still a popular option.

Swim suits were more popular than ever. Most were one piece, but the two piece was designed and worn. The tops were only 4” from the waist of the bottoms. Bottoms were skirts or like shorts, along the thigh. Beachwear, or “playsuits” were considered modest wear over a swim suit when away from the water. These were button-down; loose-fitting short outfits. These became the prototype for outfits of the 50s and 60s.

Head coverings were still de rigor for outings. Hairdos had grown long, again, and many wore their hair down. For safety at work, women wore their hair pulled back into a snood. It became a popular hair decoration. Hats, turbans and scarves were all worn in the most stylish of ways. Most hairdos were arranged so that they would look good with and without hats. Of all the looks most popular in the decade what stood out the most were the beret, the turban and the small hats with flat brims and small facial veils.

Accessories were still very important to the dress of the lady. Gloves were still worn for any semi-formal affair, like visiting or church. The gauntlet mid-arm length glove was the most common. These were plain, not lace or embroidered like previously. They were worn in neutral colors, matching one other accessory.

Purses were larger than in the previous decade. Women needed to carry more items, like office supplies and cosmetics. The purses were made with rushing and scallops. After the war, when women had more discretionary money, they bought purses in bold colors and geometric shapes.

The jewelry of the era was large, chunky and colorful. Much was made from the new plastics which came from research for the war. With the fewer clothes, these big pretty items looked cheerful.

The women clung to the concept of the ideal shape, wide shoulders, narrow waist, luscious hair. The trick of the shape was in the undergarments. Bras were large with full backs. They probably held the posture of the back better. Girdles, those awful creations, held hips from jiggling and waist tucked in. Slips were worn to keep a smooth look. Stockings were more comfortable than bare legs. They had seams up the back, which were required to be straight, and were sometimes difficult to keep so. Garters, the clip style by then, held the thigh-high stockings in place. Seams were common into the 50s. I remember!

Despite the boredom of the styles, the 1940s were a great decade to live through!