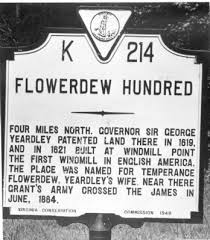 Temperance Flowerdew was one of the earliest women to arrive in Jamestown. The settlement was established in April 1607. She arrived in the summer of 1609.
This week’s founding mother was born around 1590 in Norfolk County, England. Her parents were Anthony Flowerdew and Martha Stanley. She had at least two siblings, Stanley and Mary. Temperance married Richard Barrow on April 29, 1609 in St. Gregory by St. Paul’s, in London.
Days later, Temperance boarded the ship, Falcon, commanded by Captain John Martin. It was one of a convoy of nine ships, referred to as the third supply, headed for Jamestown. The Sea Venture was the lead ship and most of the new government agents were aboard that ship. It appears that Mr. Barrow was on that ship. Three quarters of the way there, the convoy hit a hurricane. The Sea Venture was separated from the convoy and believed lost. Many of the supplies on the other ships were thrown overboard to lighten the ships.
The other eight ships did land in Jamestown, adding hundreds to the number of citizens, without the supplies. The Englishmen were not getting along with the Indians because John Smith had left. There was not enough food. Temperance, Jane Pierce and her little daughter and one other woman were assigned a place to live together. The winter was so bad that they called it the Starving Time. Mrs. Pierce was an herbologist. It was her knowledge of wild foods that saved the lives of Temperance and little Jane.
By 1613, Temperance’s husband was dead and she married George Yeardley, one of the soldiers on the Sea Venture. A month later he was appointed deputy governor of Virginia. Meanwhile Stanley, Temperance’s brother, had acquired land across the river from Jamestown. George and Temperance patented 1000 acres on that spot and developed a well-run plantation over the years.  They had three children, Elizabeth, Argoll and Francis.  When George’s appointment was up, in 1617, he took his family for a trip to England. While there, the King knighted him and appointed him Governor.
Back in Virginia, George served 1619 to 1621. In early 1619, twenty Negroes were brought to Jamestown. The Yeardleys bought several of them and brought them to Flowerdew Plantation, making Temperance the first mistress of Negro slaves in the New World. They were the premier couple of the decade.
When George died in November, 1627, the couple had several plantations. Temperance was the richest lady in Virginia. George’s brother became the trustee of the will and guardian of the children. She turned around and married the new governor, Francis West in four months. West desperately wanted her land. He even went to England to file a petition, but failed. Unfortunately, Temperance did not see her children grow up. She died a little over a year after their father.