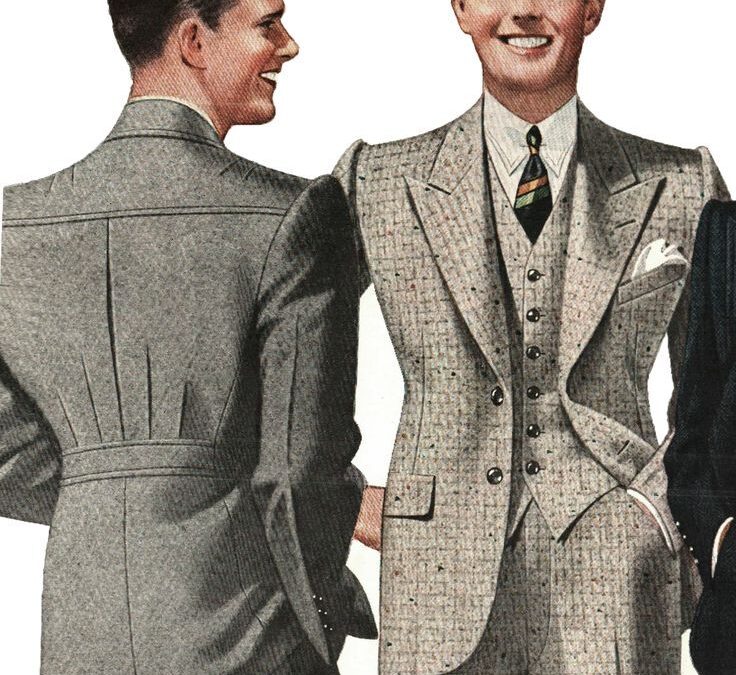 The styles of clothing changed for both men and women with the coming of the Depression. The fun-loving Roaring 20s morphed into more of a workingman’s mentality, where work and family took first place. Men began to honor masculinity, the Tarzan and tough man roles that were the rage at the movie theaters. Men started looking at themselves and evaluating their own masculinity. In an attempt to follow the trend, designers developed a look of wide shoulders, narrow waists and tapered wide leg pants to show off a man’s more muscular figure. By the 1930s, sports had stopped being a spectator sport and had become more of a participant sport. So, clothes had to be designed for the sportsmen. As sports became more prominent, a sense of the casual permeated the dress code.

Everyone who could, worked. Outside of laborers’ and servicemen’s uniforms, most men wore suits for the majority of the day. Material, cut and color dictated the use of the suit. The needed effect of these suits was to add an illusion of added height and width (at least in the shoulders). This was achieved with shoulder pads, slimming shaping at the waist, and various cuts of jackets and pants.

The patterns were solid, glen plaid, herringbone, stripes, checks and windowpane checks. Summer suits had more variety, with colors as varied as medium blue, tan, beige, cream, golden brown and grey. They had more patterns, adding chine, birdseye (a small diamond pattern with each diamond having a dot in the middle) and vertical and diagonal stripes. The “Palm Beach” summer suit was made of a cotton/mohair blend with an open weave. Other summer materials were seersucker, shantung silk, rayon blends, linen and gabardine. This last one was quite popular. It is a tight weave of wool, cotton, texturized polyester or a blend of these, with a prominent diagonal rib on the face of the material. The pants were so durable that men could wear the bottoms without the jackets, for a casual look, without worrying about wearing them out. Single-breasted and double-breasted varieties of the jacket existed. Double-breasted built up a thin man.

Suits often came with matching vests. These were 5-6 button fronts with or without lapels, mostly single-breasted. The pants were designed to fit high on the waist, with full leg, tapering slightly to the cuffed ankle. They were in both pleated and flat, for a lean look, versions. The ironed crease down the middle of the pant, front and back, was designed to add height. The waist band had belt loops for narrow belts and, by the mid-30s, with technological advancement, the zippers made button-flys a thing of the past. The deep crotch drop would be popular for several more decades. One pant style did not last too long: the very high waist pant which young men wore with short sweaters.

Sport coats became a welcome addition to an American man’s wardrobe. Mixing and matching jackets and pants extended an otherwise limited wardrobe. The sports coat tended to be of gabardine or some other strong material. It came in a variety of colors from golden tan to blue to ivory. Green and burgundy were less common, but seen. Men paired sports coats with matching or contrasting pants, both in color and texture. Although it was a strictly country item in the UK, men in the US started using this casual look for the office.

Dress shirts were similar to what we see now, with a variety of patterns and colors. Cotton broadcloth was the most common material. In the late 30s, rayon and silk rich-hued shirts became popular. The long sleeves had one button or French cuffs, and a single chest pocket. The collars were narrow, pointed down and 3-5” long.

Ties came in every possible design and color to coordinate or clash (as the wearer saw fit) with the shirts. Handwoven ties made of textured materials became popular.

Coats did a lot of redevelopment in the 1930s, starting with a variation on the British grenadier greatcoat of the early part of the century. Full shoulders and upper arms of the coats were supported by shoulder pads. The arms tapered to the wrist and the torso tapered to the waist. Two pleats in the back were inserted for needed ease of movement. In the mid-30s, the raglan sleeve coat was popular, in both single and double-breasted styles. They were in plaids and checks, with herringbone tweed becoming popular by the end of the decade. Solid colors with a print lining were common. Richer men wore the coat with fur lining in the winter. The camel hair top coat and the tan wrap coat became quite popular with young men. The wrap had a big collar to flip around the neck, a full, shorter skirt, with the tie belt moved to the side. The most popular coat of the decade was one designed for the detectives of the ever-popular movies, the trench coat.

Hats were worn by all men in the 1930s. The most popular was the classic fedora. It was made of fur felt or wool felt. It had a 5-6” crown, a deep center dent, with an optional pinch front and a 2 ½” brim. Men shaped their hats in various options. The conservative businessmen wore homburgs, in dark colors. This hat had a lower crown, with a rolled rim with a grosgrain edging and a wide ribbon band. The bowler was on its way out by 1930. In summer, straw hats in these shapes could be found. Boaters, hats with flat crown and brim were popular with the young men. These hats boasted ribbons in the colors of their college or organization. The pork pie hat, in straw or felt was a new phenomenon. The brim curled up all around, with a flat crown. In the movies, men who wore these hats tended to be portrayed as less intelligent.

Shoes were quite stylish during the decade. Oxfords, 2-toned oxfords and wing tips were the most common. The colors were black, brown, brown with cream, black with white, black with grey or white. They were worn to match the outfits. The decorations included the wingtips, contrast stitching and decorative tooling.

The most comical part of men’s clothes were their socks. Silk socks came in all possible patterns and colors. Men mixed and matched their socks and pants. Blue pants and green and yellow socks would not be out of line.

Men used accessories such as watches, either pocket or wristwatches, some jewelry and gloves. These gloves ran the gamut from workmen’s gloves to driving gloves, a shorter version of thin material, to get a good grasp of the steering wheel. Men wore day gloves, if very well dressed. White leather gloves for formal evenings were used with formal clothing.

This decade was one of the most-classy for men’s fashions. Just look at any 1930s period film! Thanks for reading this blog. I hope it helps you picture your characters’ looks a little better.