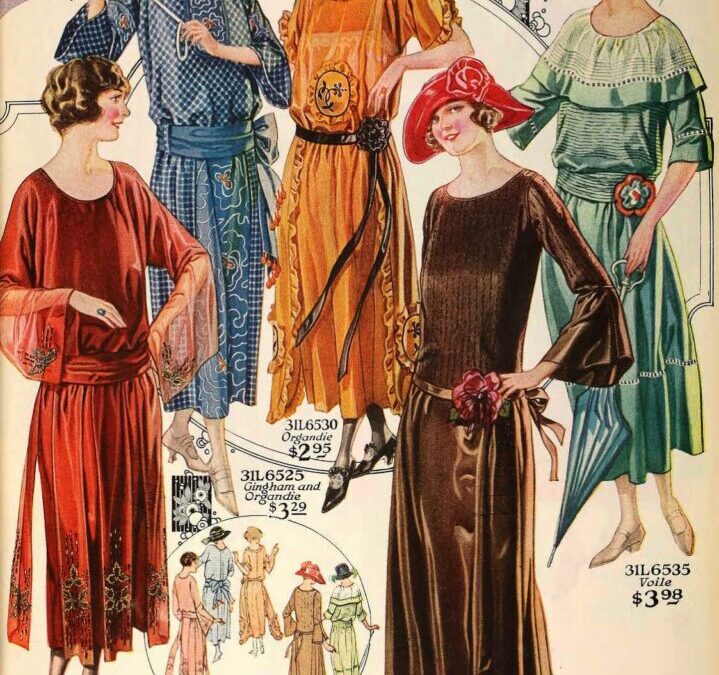 The Great War, women’s suffrage, improved international trade, more thorough education for the masses. What do these all have in common? They all contributed to the most amazing and fast change in culture in many centuries. And one of the most predominant features of that change was the entirely new look for women!

Contributing to the war effort, women, by the end of the war, were seen as intelligent and capable of handling decisions. By 1920, women in the US were given the right to vote. Suddenly, women saw themselves as competing with men on the job front and bringing home their own money. Financial freedom makes one develop social freedom. And many women did. They expressed their freedoms with their styles.

Gone were the days of morning, afternoon and evening changes of clothing. Clothes were now defined by what you did while wearing them: housedresses, going out dresses, evening apparel, sports outfits, etc. One might change several times during the day, but for a specific reason.

Typically, house dresses were simple, straight cotton or cotton blend affairs, in plaid, prints or colors. They were either not waisted or had a drop waist. They had small white collars or wide, long, flat collars, long or short sleeves. The dresses were often decorated with embroidery, lace or rickrack. They were most often worn with dark stockings and sensible dark oxford shoes, flat or with a short heel. The dresses were very blousy and did not need buttons or hooks. They could easily be put on and taken off, making dressing a very quick affair. Most often the dresses were covered with a full apron while working in the house. Older women brazenly showed their ankles. Younger women had hems above mid-calf.

The house dress would never be worn outside the house unless the wearer had nothing else. The ladies dressed to go downtown for errands or to go visiting. The tall, thin look abounded everywhere. And the ease of dress continued with the new “boat neckline”, much wider than the close necklines previously seen in day dresses. Fabrics ranged from casual jersey, batiste, wool, linen, knits, crepe, and rayon to fancier silk, taffeta, organdy, and velvet.  These beautifully draped materials can’t even be found in fabric stores. anymore. The material of the garment made a status statement.  Dresses with sashed natural waists or dropped waists were worn alone, or with a matching or coordinated long jacket.

The most popular colors for summer were jade, sunset orange, powder blue, white and pale yellow. The fall/winter colors were black, mauve, purple, sage green and burnt orange. City dwellers tended to have muted colors. Country and seaside dwellers went brighter. Solids were more common but there was some representation of polka dots, plaids and small prints. The dresses were busy with pleats, tucks, embroidery, smocking, ties, and belts, everything arranged to accent height. Long sleeves were de rigor, except in the summer.

Hems were all over the place in the 1920s. The straight skirt was hard to move around with. Answers to that problem included side pleats, flounces, tiers of material, bias cut patterns and, the most popular, bringing the hem higher. By 1927, the popular height was just below the knee. It had already started to drop by 1928. That year, my grandmother got married and her mother insisted on the shorter style for the wedding gown. Her mother was a seamstress.

Due to the leg exposure, stockings became an important part of the outfit. They came out in cotton and silk. The silk ones came in white, black and beige. For the poor teens who could not afford stockings except for good occasions, the fad in some big cities, was to paint smile faces on their knees with lipstick. The sales of both stockings and lipstick skyrocketed over the decade.

Jewelry was plentiful and somewhat gaudy, like beads, pins on hats and jacket lapels. Small purses held little. Shoes were heeled Oxford, Mary Janes, or T-straps. I remember my grandmother telling me to keep a quarter in my shoe, for a quick getaway phone call; of course, it was only a nickel back then. Many girls would go out without a purse. The well enclosed shoes could easily hold a coin.