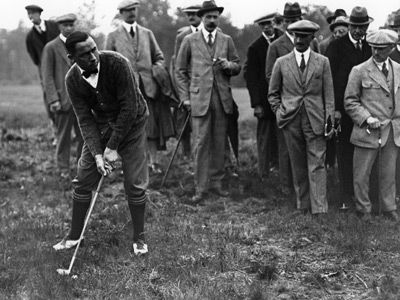 The outfits men have worn in the past few hundred years have been an advertisement of their class and job status. The 1920s was no exception.

Workmen often had to wear specialized clothing especially when working on motors and fast-moving machines. These could be uniforms, long coats over regular wear or heavy-duty material. Laborers and workmen wore work shirts that were very similar in style to dress shirts except they were often made of heavier cotton, flannel, wool or chambray and had two breast pockets rather than one. Most often they were made in solid colors, except for the plaids worn in winter.  The pants worn to work often had bigger patterns, wider stripes or more colors than the materials of suits. In the winter the pants were made of wool, moleskin (a very tight weave cotton) tweed and corduroy. The spring/summer season saw the men in flannel, light wool or duck cloth (a light canvas). Denim was used for overalls and work pants that factory workers or farmers would wear. Holding up the pants were leather suspenders that buttoned on, and belts. Most workmen wore sturdy lace up boots made of horsehide leather. Cold weather mostly saw the workmen in leather “lumberjacks” or plaid mackinaws, both being short but very warm jackets. On their heads, most laborers wore caps, wool in the winter, linen or poplin in the summer. You did not often see a mackinaw with a fedora.

The majority of men in cities were dressed fashionably, however. It was a classic, sophisticated look, with a touch of clever fun in the accents. This means, for daytime, a three-piece suit, jacket, vest and pants. All matching. With a tie, dress shirt, socks and shoes. Even teens and college men dressed as well as they could even if it meant wearing hand-me-downs or unmatched vests.

Suits, for winter, were made of wool tweed, mohair, wool flannel or corduroy. Colors were the more traditional browns, medium blue, dark green and grey with pastel stripes. Patterns were in bold plaids, checks and windowpane check. Summer suits were made of lighter wools, linens and cotton seersucker. The colors were lighter, too, ivory, white and pastels (like lilac!) The jackets were mostly single breasted with three to four buttons and two flap pockets, until slit pockets were made in the later part of the decade. Rule of thumb was that the top button was over the heart. Vests, with or without collars, were cut to be completely hidden behind a buttoned jacket. The cut of jacket and pants was snug and slim in the early part of the decade. Then, as the economy grew, the pants and jackets both got boxier, with pants eventually having a 10-12” circumference at the hem. Jacket lapels were a big fashion item, growing bigger with every season. The notch lapel was the customary one for years, but towards the middle of the decade, the peak lapel began to show itself. The pants came pleated or flat, with slit pockets on the side and one welt pocket in the back. Pants fit high to the natural waist, fit loose at the seat and hips and fell to the top of the shoe, no longer, so as to avoid buckling at the ankle.

There were tiers of business and casual dress. A slightly more casual summer look was the all-white or the white pants and navy jacket ensemble that the college boys wore. These were accessorized with a captain’s hat and white or two-tone oxfords. A variation was a jacket striped with the colors of the organization or school colors worn by sports figures or spectators.

The black pinstripe double-breasted suit, assumed to be worn by gangsters in the 20s, didn’t really exist. This was just a Hollywood gimmick to instantly identify the “bad guys”.

What did men wear for evening wear? There were various degrees of formal wear. The tuxedo with tails, a satin stripe on the pants and wing tip collar was what one wore to theater, upscale restaurant or night club. White tie and vest was more formal than black tie and vest. In the mid 20s, the tuxedo jacket made its debut. It was more comfortable than the tails. A morning suit was worn for formal day time wear. This consisted in black tuxedo jacket, grey striped pants, buff or ivory or black vest, a bowler and spats.

Little boys did not wear long pants. And neither did golfers. They wore knickers, just below the knee-length pants that were full and gathered into a cuff. Socks going up to under the cuff completed the pant look. Most wore sweaters, shirts, ties and caps to complete the look, boys and men. Tennis and cricket players dressed similarly, but tended to wear all white.

Sweaters became popular after the Great War. They were affordable and had a fun look. There were pull-overs and button downs, high shawl collars, turtle necks and V necks. All but the turtle necks were worn with dress shirts and ties.

Shirts were very similar to what men wear today. They were mostly vertical stripes early in the decade and solids in most colors later. Collars were round-tipped, pointed, with a 2.5-3.5” length or button-down. You occasionally saw the stiff linen removeable collar, but mostly on old men. A white collar and cuffs on a different color shirt was almost exclusive to the 1920s. The biggest problem with ready-made shirts, which was quite common by then, was that they came in neck sizes only. No sleeve lengths, no torso considerations. So, many men got longer sleeves than they wanted. To avoid getting sleeves into the soup, or the ink, men wore arm bands made of webbing to hold up the sleeves. This stayed for several decades as a style.

Ties went with all shirts. Very full bow ties in stripes and polka dots, Art Deco or paisley silk neckties, or knit ties with fringes: these were the looks of the time. The ties were short, ending several inches above the waist.

The most common winter coat was a long, loose heavy wool with wide lapels. Rich men sported fur collars for warmth. Trench coats were common in wet weather. The big fad of the decade, for all the college men and coeds, was the raccoon coat!

Men always wore hats. Laborers and sports figures wore caps. In the winter, they were wool, corduroy or tweed in blues, greys and browns. In the summer they were linen or cotton poplin.  The interesting thing about caps is that they did not have to either match or coordinate with anything else the person was wearing. Other hats, straws, homburgs or fedoras, had to coordinate with the rest of the outfit.

Mens’ shoes were boots until after the war. The low-cut oxfords came in single colors. Wingtips were the fancy dress shoes. Black patent leather was strictly an evening shoe.

Once low-cut shoes replaced boots, the socks began to show. Crossing a leg made them show quite a bit. These became colorful and patterned. Since there was no elastic in socks until much later, men wore elastic garters to hold up the calf-length socks. These socks were argyle, striped or solid.

Accessories for men included gloves, like unlined driving gloves, in an array of colors, pocket squares which coordinated with ties, collar pins to keep the soft dollars from bending, spats, to keep the shoes clean, pocket watches, and walking sticks.