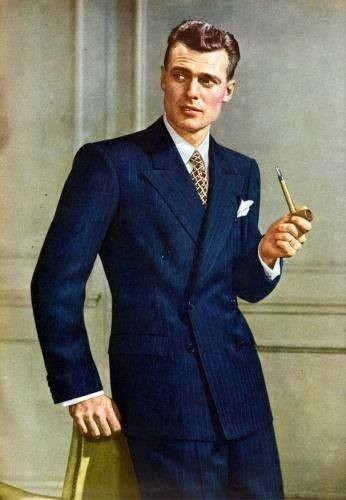 Men’s clothes seem to always be the same, at least in the past 100 years, you say. Well, I agree, up to a point. Suits can only have so many variations, of course. But the details are what make the suit. Variations of the details put the suit into or out of style. And, the 1940s, especially the later half of the decade, brought out a new concept: casual dress as a new style for adult men, not just teens and the university crowd.

In the 1930s, the style seemed to be “big”. During the war years, restrictions on fabric use meant that the men who stayed home had to do with more basic styling. Pockets on jackets could not have flaps. Trouser pants could have a maximum of 19” circumference at the ankle, and no cuffs. Suits without vests became the norm, being seen as “wasteful”. Cuffs being so popular, some men got creative, bought pants that were too long then brought them home to have a tailor cuff them. Emulating the ideal soldier, the men on the home front wore suits cut to make them look more muscular, masculine. Wearing older style suits was a badge of patriotism, saving the cloth for “our soldiers”.

In England, the restrictions were even harsher. No pleated back jackets or half belts, no raglan sleeves and no metal zippers or buttons.

For decades, men had worn suits for everything, from office to picnics. The suits tended to be made of thick wool, worsted wool or tweed. With the war, the wool was mixed with rayon to save more wool for the uniforms. It probably was a more comfortable suit. Winter colors were conservative: black, navy, grey, dark brown, tan, medium blue. Summer colors were lighter versions. Tweeds, herringbones, checks, plaids and wide chalk stripes were available.

Double breasted jackets were restricted during the war, so the new style suit coat was single breasted, only, for a few years. The war-time styling called for jackets to be tapered at the waist, with well-padded shoulders. Together with the wide notch or peaked lapels, it gave the illusion of a big man. When the double-breasted look came back, the men looked very big, indeed!

The suit trousers had either a flat or single pleat at the front. The waist fit high, with a 3” band. Suspenders were still de rigor, but, as the war ended and leather became more available, the pants became more fitted at the waist and belts with metal buckles became more popular.

Dress shirts now came with attached collars sporting large pointed tips. Shirts were one of the few colorful parts of a man’s dress. They appeared, mostly in cotton, in blue, white, tan, yellow, green and grey solids. Thin stripes and pin dots were also seen. They were shorter than today’s dress shirt lengths, due to the high waist, and were designed to be tucked in.

Neckties were shorter, also, designed to end 2” above the high waist. They tended to be very artsy and themed. Made of silk, rayon or wool, the long ties were as creative as the socks, with argyle, stripes and pictures. Bow ties were out for all but the older men. Pocket squares were a must, now. They could be white or colorful, but not for practical use.

Next time, we will discuss the more casual look for men that came in the 40s.