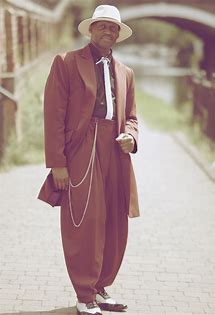 One of the outstanding features of the 1940s is the Zoot suit. These first appearing in the 1930s, but, by the 1940s they were associated with gangsters or rebellious young men. They were characterized by heavily padded shoulders, wide lapels, double breasted styling, long jackets (mid hip length), baggy pants with narrowly-circumferenced cuffed ankles. Suspenders were needed to hold up the pants. They came in vibrant colors, like purple. Since such a suit contained more material than rationing permitted, they were seen as unpatriotic. The colors were the opposite of the military look.      On the east coast, a tie and dress shirt were worn. On the west coast, the wearers sported an open collar. A modified version became popular in the late 40s and early 50s. With that outlandish outfit, men wore wide ties and big hats. You could identify the gangster type from a block away!

After the war ended, there was an excess of military surplus on the market. People bought them or copied them for civilian use. Items included trench coats, bomber jackets, knit undershirts, chino jackets, pea coats and aviator sunglasses. Machinery which had been updated to speed up the manufacture of uniforms was now used to turn out civilian counterparts. Casual clothes, especially the shirts, became welcome when the men returned from the front. There was no going back to stiff and formal.

Not every man worked in an office. There was a distinction between the men’s office clothes and working men’s clothes. Workmen, factory workers or gas station attendants, wore collared shirts and work trousers, usually made of cotton twill or gabardine. The pants had flat fronts with a single leg crease. Leg widths were narrower than dress pants. The whole ensemble was in basic colors, white, green, dark blue, brown. Work shirts were all very similar with soft, pointed collars, patch pockets on either side of the buttons, pleats in the back and larger armholes for greater mobility.

Casual and sport clothing became very popular after the war. Knit shirts, vests and pullovers were suddenly common for all age groups. They all had textured ribbed knits that were form fitting, with rib bottom edges, sleeve ends and neck bands. They came as high round neck or V-neck styles. They were seen in solid colors, with wide horizontal stripes or in Norwegian designs, especially around the winter holidays. Either the V-neck vests or long-sleeved versions would be worn over dress or casual shirts. Winter weight knits were in wool and summer weight were in rayon or cotton blends. This outfit was often worn with contrasting colors, deliberately.

Dress shirts turned casual for some occasions by having boxy sleeves and a straight cut at the bottom, so that they could look good not being tucked in. Often there were two chest pockets. They came in all sorts of colors, patterns. After the war, Hawaiian prints became popular as did Western styled shirts, boots and hats.

Casual trousers continued to look much like dress trousers, with lighter materials like wool blends for the cold, cotton poplin, gabardine or seersucker. The pants came in solid or patterned (ie herringbone, small check, tweed). The fun was in mixing shirt and pant colors. Sports coats, which had begun to show in the 1930s, became more popular with all sorts of patterns.

Outer wear was adapted from the military styles. Overcoats were knee-length, straight and boxy. They had wide peak lapels and side-angles slit pockets. Later in the decade, they were belted. Colors were typically tan, plaid, tweed or herringbone.  The trench coat became vastly more popular than any other, whether it was the early single-breasted version or the belted double-breasted one. Every detective in every mystery movie wore one.

Men’s shoes were designed for quality, durability and sensibility. They included oxfords, wingtips, brogues and slip-on loafers, the later being more of a casual look. Brogues were a good choice for summer due to their decorative perforations through the leather, letting feet breath a little. Colors were limited to black, brown, white and two-tone, a male version of women’s spectators. For the working man, boots were of thick leather and soles, laced with hooks at the top.

The styles had definitely changed and, 70 years later, have not reverted.