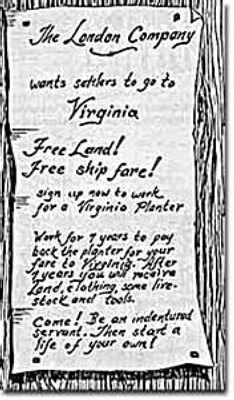 The first English settlers to Virginia were not respectful of others who were different. They were not passionate, or even moderately interested in the rights of others, unlike their descendants 150 years later. Any interest was simply economic, a business transaction. This is not simply a definition of the distinction between the whites and the natives. This is a way that the rich white landed gentry looked on everyone else. Many women got caught up in the middle of these business transactions and lost.

Jane Dickenson was married to her husband, Ralph, some time before they came to Virginia in 1620. Since they could not afford to pay the fees required, Ralph signed a contract with Nicholas Hide. He would be an indentured servant, for seven years, in exchange for the transportation. Hide probably lived in Martin’s Hundred, a plantation of about 21,000 acres, on the north shore of James River, several miles downstream from Jamestown. There was an administrative center named Wolstenholme Town. The tiny, year-old hamlet was a fortified area of about 40 poorly constructed huts. They were made of daub and wattle, woven to poles buried in the clay soil. A good rain could wash them away.

Ralph was a servant to Nicholas Hide for about two years when the unbelievable happened. In the early morning hours of Good Friday, March 22, 1622, members of the Pamunkey Indians attacked various spots along the river, with the intention of getting rid of the white people. One of the most damaged area was Martin’s Hundred. Ralph was killed outright and Jane was kidnapped. The couple were named Ralphe Digginson and his wife in the list of the murdered.

When the fight was over and people came out from their hiding, they discovered severe damage. In Wolstenholme Town only two houses and part of a church were left standing. The people tried to take a census. At least fifteen women were claimed to have been killed, yet their remains could not be found. It was months before rumors, circulated by Richard Frethorne, a settler in Wolstenholme Towne, were heard that the women were living as slaves in the Indian villages.

In the meantime, various small bands of settlers went after Indian villages as revenge, killing natives and burning corn fields. They did not go to rescue the women. As a matter of fact, the women were not only terrorized by the natives, but also by their own people. They were also starved by the loss of crops and danger of hunting, with the white men around. Jane and others were made to be the bottom of the barrel denizens of the tribe. After ten months, the attacks were so ferocious, that several women ran away from their captives, hoping to make it back to English civilization.

Were the women protected? Given psychological help after being in captivity? Hailed for their heroics? No.

Dr. Potts, physician and future governor, heard that others were still being held. He offered to pay a ransom of two pounds of beads for Jane Dickenson. But he had a plan in mind to reimburse himself. Jane was told that since Ralph’s term of indenture was never finished, she had to do it. Then she was told that she would have to reimburse Potts for the ransom money. She became an unwitting indentured servant herself and was moved to Jamestown, to Potts’ house.

Female indentured servants were not often well treated. Beatings and sexual assault were not infrequent. Jane, probably having grown up poor, was likely used to difficult times. But her life was much more difficult than simply being a poor, married settler.

Even she had it better than some women. Several died in Indian custody. And one woman, Anne Jackson, apparently lost her mind after being rescued in 1630, eight years after the attack.