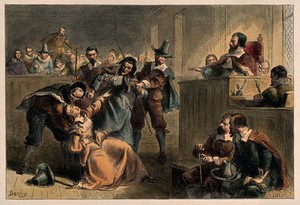 Lydia was a Farley. The Farleys were Quakers and anti-government. Her uncle was Captain George Farley. More about him, later. Her mother, Elizabeth, George’s sister, was widowed before Lydia was of marriageable age, and she  remarried Thomas Bushrod, a recent widower. This Mr. Bushrod was a Quaker, which was illegal at the time. He had continually gotten into some trouble by his confession of beliefs in both Massachusetts, as a young man, and in Virginia. At the same time, he was a justice for York County as well as a burgess in 1658 and 1659. He had been married before to Mary Peirsey Hill, the sister-in-law of the notorious Governor, John Harvey.

Lydia was born around 1649. Her mother remarried in 1661 and they moved to the large plantation in York County that Bushrod had inherited from his dead wife. With Bushrod’s political ties, Lydia soon found a suitor who was acceptable. She was married within a few years to Edmund Cheesman. Edmund’s family had gotten into serious trouble when he was young, being arrested for having Quaker meetings at their house. Even his mother had been arrested. It would appear that Lydia was brought up as being sympathetic to Quaker religious thoughts.

The two married around 1670 and Edmund began building his legacy by patenting 200 acres in Charles Parish, York County on July 1, 1670. Within weeks he became a justice of the peace. In two years, he was a captain of the militia in York. During this time, Lydia and Edmund had a son, John, who died at a very early age. They had no further children. Four years later, Edmund was promoted to major. At that point, Nathaniel Bacon, a brash young immigrant, virtually declared war on the Virginia government. Not only did Edmund agree with Bacon, he joined his side. His contemporaries saw Cheesman as being a principal actor in the hostilities. His father had marched against the Pamunkey Indians in 1644, and Cheesman may have embraced Bacon’s plans to make war on Virginia’s Indians. It also appears that Lydia agreed with, or even encouraged, his actions.

This is where Lydia’s uncle George appears. George was sent to England for his education as a young boy. The rise of Cromwell coincided with George finishing his education and he joined the rebellion on the side of Cromwell. Once the king returned to power, George returned to Virginia. Apparently, fighting was in George’s blood, for he joined Bacon’s rebels around the same time as his nephew-in-law.

In November of 1676, Edmund was captured in York and accused of treason. George was captured and accused about the same time. Governor William Berkeley came for the preliminary trial. Lydia managed to sneak into the hearings and eventually was able to speak. and she pleaded with the governor to spare her husband’s life on the grounds that “if he had not bin influencd by her instigations, he had never don that which he had don.” On “her bended knees” she begged the governor “that shee might be hang’d, and he pardon’d.” Her eloquence and bravery failed to persuade the governor to release or spare him. Nor was she able to persuade him on any grounds to save her uncle. Before the trial date, Edmund died in prison, whether of sickness or exposure or grief, we will never know. She must have been quite a woman to even propose such a thought!

Two months later, George was executed in Accomac County and all his estates were forfeited to the king, or, perhaps, to the governor. His son, John, never got his family’s land back, since he, too, participated in the rebellion and was in prison at the time of his father’s execution.

In February, Governor Berkeley issued a proclamation of pardon for the treasonous actions of three men who, by coincidence, just happened to all die in prison over the winter. Edmund was one. Within three months, Governor Berkeley, having gone to London to report to the king, was dead.

A year later, Lydia claimed the estate of Edmund. It was probably held for some time after the trial. The estate consisted of 250 acres, six laborers, five black and one white, livestock and household furnishings. In June of 1678, the widow Lydia Cheesman married Thomas Harwood. She and her new husband occupied the land until her death. She died in the spring of 1694 by lightening. She was not yet 50.

After her death, Lydia’s brother-in-law, Thomas Cheesman, tried for years to gain the estate, eventually winning after the death of Harwood.

Jamestown, Virginia was settled in April, 1607. A total of 144 men, boys and mariners were in the first ships to land. These men were predominantly gentlemen adventurers, with a handful of laborers, carpenters, a minister and a barber. Twenty or more were there, temporarily, to help settle things, the ships’ crew. This was not a good beginning for a colony. It was more like a fantasy adventure event. There were not enough people to build houses, cook food, plant crops. They were left on their own in an unknown place to make due. Captain Christopher Newport took his crews away before winter.

The following January, Newport returned with one of two ships laden with supplies. The other showed up in April. This ship included a lower percentage of gentlemen (only 28 out of 73), more laborers, and some specialty workers, tailors, a jeweler, a perfume maker (not that I would know why!) and a few others. They also were given instructions to come up with some products for the Virginia Company to sell for profit. It was at this time that a fire consumed most of the stores of the colony. They had to rebuild much of the fort. Rather than planting more corn in the spring, the men went out hunting or chopping down trees for huts. The crop was late in coming.

The second supply ship arrived in October, 1608. This ship carried the first women, Thomas Forrest’s wife and her maid, Anne Burras. Captain Newport’s 70 passengers included 26 gentlemen, a number of laborers and fourteen tradesmen. Who they could sell items to was yet to be seen. Instructions were to go look for the survivors of the lost Roanoke colony. Newport returned to London with pitch, tar, clapboard, wainscotting and other items, the sale of which did not give the Virginia Company much of a return on their investments.

In the spring of 1609, Captain Samuel Argyll arrived, having found a shorter passage to Virginia from London. The colonists were again in danger of failing. A rat infestation in April had eaten all their food. Argyll sold as much of his stores as possible to Captain John Smith. He gave promises of more help and food on its way to Jamestown but he did not leave til October.

On June 2 of that year, seven ships and two pinnaces formed a flotilla to come to the aid of the failing colony. Most of the supplies were on the lead ship, while the other ships held up to 400 passengers and their personal belongings. Yellow fever broke out on two ships and “London plague” on another. Then they met a hurricane at the end of July. Almost everything was thrown overboard during the storm to lighten the load.  The lead ship was blown off course to Bermuda, where it was grounded on shoals. One ship was lost. The various ships limped into Jamestown harbor over the course of two months, but without much in the way of supplies. About 300 people needed to be accommodated, without extra food. A suspicious explosion, severely burning John Smith, led to his leaving with Argyll and others on the return voyages of the ships. The death of all three council members and no firm leadership added to the difficulties of the colony. With winter coming and a drought leaving them with a poor harvest, the colony was all but doomed.

The building of homes superseded the importance of finding food. Indian attacks made fishing and hunting very difficult. By the time it was cold, not enough fishing or hunting had been done to make up for the lack of corn. And few men knew how to identify edible wild fruits. People died of starvation over the course of the cold months. One house of women survived primarily on roasted acorn seeds and other greens found in the late summer and preserved. 90% of the inhabitants had died by spring. The 60 survivors were suffering from trauma.

Those left decided they had had enough. With only a handful of people left, the desire to return to England was in most people’s minds. On May 24th, two small ships sailed into the harbor. Those on board were the survivors of the Bermuda grounding. The industrious crew had rebuilt two smaller ships out of the large ship. Interim governor Thomas Gates was among the arriving men. After meeting with the survivors of the Starving Time, Gates decided to close down the experiment, put everyone on the two ships and go back to England.

As the distraught passengers sailed down the James River towards the bay, they met up with a supply ship from England. It contained more settlers, food, supplies, and the new governor, Baron De La Warr. The new governor told Gates to turn around the ship and head back.