vancouver and on to missoula 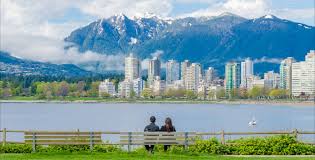 Our cousins actually live outside Vancouver, in the greater metropolitan area, in the Tswassen area of Delta. It is an upscale suburban area with new houses, beautiful condos and many boutiques and sidewalk coffee shops.

Tswassen is on a peninsula bordering the strait of Georgia. Due to the treaty of the US and Canada in 1925, the peninsula is cut in half by the 45th parallel, south of which is US territory. So, there is about 6 square miles of US at the tip of the peninsula. And the only way in and out is through Canada. The RV park is on the US side and the cousins are on the Canadian side. So, we were constantly going through border guards during our stay.

Beverly and Don live in a lovely, spacious first floor condo on a cul de sac. There is a sizeable deck in the back, alongside the morning room. Roses and evergreens grow together in the lawn adjacent to the deck. Lovely.

The reception of these two people for a couple they have never met was overwhelming. On Tuesday they had us for dinner, chicken and potatoes, plus dessert. We exchanged stories of the families, Beverly and Don explained their visits to the family origins in Italy and compared family pictures. I had brought a family scrapbook.

Wednesday we had lunch together. Dear Hubby was over tired from all the driving, so he took a quiet break while we three took some sun in at the beach. Then Beverly and Don hosted a cousins pot luck dinner to introduce us to the others. We met Maureen, Rick (brother and sister) and Diana, plus Rick’s wife, Lisa, and daughters Clare and Grace. They are cousins of Beverly (thus, of mine) who also live in the Vancouver area. All were gracious, had questions, looked at the scrapbook, and declared who looked like whom. Apparently everyone has been to Serra San Bruno but me! Dinner was great! Rigatoni, sausage, meatballs, salad, several desserts and a variety of beverages. We chatted for several hours before the evening ended with photos being taken of the new-found cousins.

Thursday morning, Hubby and I went for a walk to the beach on Point Robert. One restaurant, Brewster’s, had a “fresh fish today” sign. That gave us an idea for dinner. In the afternoon, Beverly and I went out for coffee and a little quiet time, then I suggested dinner on the point instead of her cooking. We went to the quaint little place we had seen in the morning with the sign in front. We had crab cakes, or fried oysters or baked salmon. We hated to say goodby at the end of the dinner, but all good things must come to an end. But we will be talking to each other. Beverly gave me copies of letters from cousins in Hartford and will be sending me pictures.

Friday and Saturday nights were spent in a very nice KOA park to wind down from a few very intense days. Sunday morning we went to St Stephen the Martyr church. This was one astonishing place. The church, a one story, flat roofed affair on a 20 or so acre campus. There were extra buildings housing the housing office, the bottle collection, the food pantry. There are little picnic pavilions and a grotto. Plus three parking lots. And there are 4 weekend Masses, including one in Spanish. The church easily holds 500+ and was almost full. Ushers had to help people find a place to sit. The bulletin was even impressive. So many activities that it is 8 pages long!

Since we got a late start on Sunday, we figured we would only go as far as Spokane, 200 miles. We got off Rt 90 for lunch at the Pancake House in a pass in the mountains. Got lost trying to get back on and took a detour down a crazy mountainside with switchbacks. Took almost an hour to get back to where we were supposed to be. Then we decided to get off 90 and take a smaller more local road. Unfortunately, the map did not indicate a lake that was in the way of a right hand turn. Going 30 miles before we realized the problem, we lost another hour. So, needless to say, we ended up staying in the middle of the state instead of the far eastern section. After the Cascade Mountains, the middle of the state became semi-arid. Very sandy and rocky. Mostly for cattle, but in the areas irrigated, there are many orchards. Fruit stands abound.

The trailer had been making a sound since we got the new tires. We decided it was one of the driver’s side wheels. So, getting into Spokane on Monday, we found an RV service center. They didn’t have time to see us. So, Hubby took the wheel off in front of the place, found the broken spring mechanism and took it in to the parts department. “We don’t carry that kind of stuff!” was the response. Hubby took it out to the lot and asked a worker where a parts store might be. The fellow took one look, took Hubby for a ride on his golf cart and down to a junk yard where they found an old axle with the exact right part still attached. So, we lost the sound and it cost nothing. Why? The worker said, “Just say a prayer for me”. Honest!

Spokane is about 4 hours from Missoula, Montana. Beverly’s daughter, Gia, lives there. I had spoken to her a few years ago via ancestry.com. Now I got to meet her! Lovely. Looks like the Amatos, same eyebrows. Very gracious and hospitable, she made dinner for us and invited her mother-in-law and brother-in-law over. Turns out they had lived in Cortland until her sons were high school age. It was like old home day, talking about central New York, in addition to family. We spent two hours with them. I enjoyed speaking with Gia. She, too, has been to Serra San Bruno. Guess my next trip should be to Serra! I am the only one who hasn’t been there!